So this post was supposed to be up 2 days ago. I got sick (again) and have been struggling with my mental health, but here it is. Finally.

Anyway, I was sent all three books in The Bone Witch trilogy by Rin Chupeco in exchange for an honest review in collaboration with the Fantastic Flying Book Club.

I had been eyeing this series for a while, and I feel so lucky I was included on this blog tour. 🖤

Also, don’t miss the playlist I created and giveaway at the end of this post!

The Shadow Glass by Rin Chupeco

In the captivating start to a new, darkly lyrical fantasy series for readers of Leigh Bardugo and Sabaa Tahir, Tea can raise the dead, but resurrection comes at a price…

Let me be clear: I never intended to raise my brother from his grave, though he may claim otherwise. If there’s anything I’ve learned from him in the years since, it’s that the dead hide truths as well as the living.

When Tea accidentally resurrects her brother from the dead, she learns she is different from the other witches in her family. Her gift for necromancy means that she’s a bone witch, a title that makes her feared and ostracized by her community. But Tea finds solace and guidance with an older, wiser bone witch, who takes Tea and her brother to another land for training.

In her new home, Tea puts all her energy into becoming an asha-one who can wield elemental magic. But dark forces are approaching quickly, and in the face of danger, Tea will have to overcome her obstacles…and make a powerful choice.

The Heart Forger (The Bone Witch #2)

In The Bone Witch, Tea mastered resurrection―now she’s after revenge…

No one knows death like Tea. A bone witch who can resurrect the dead, she has the power to take life…and return it. And she is done with her self-imposed exile. Her heart is set on vengeance, and she now possesses all she needs to command the mighty daeva. With the help of these terrifying beasts, she can finally enact revenge against the royals who wronged her―and took the life of her one true love.

But there are those who plot against her, those who would use Tea’s dark power for their own nefarious ends. Because you can’t kill someone who can never die…

War is brewing among the kingdoms, and when dark magic is at play, no one is safe. 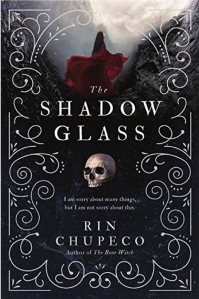 The dramatic finale to The Bone Witch series! Tea’s dark magic eats away at her, but she must save the one she loves most, even while her life—and the kingdoms—are on the brink of destruction.

In the Eight Kingdoms, none have greater strength or influence than the asha, who hold elemental magic. But only a bone witch has the power to raise the dead. Tea has used this dark magic to breathe life into those she has loved and lost…and those who would join her army against the deceitful royals. But Tea’s quest to conjure a shadowglass, to achieve immortality for the one person she loves most in the world, threatens to consume her.

Tea’s heartsglass only grows darker with each new betrayal. Her work with the monstrous azi, her thirst for retribution, her desire to unmask the Faceless—they all feed the darkrot that is gradually consuming her heartsglass. She is haunted by blackouts and strange visions, and when she wakes with blood on her hands, Tea must answer to a power greater than the elder asha or even her conscience. Tea’s life—and the fate of the kingdoms—hangs in the balance.

Despite an unsettling resemblance to Japanese revenants, Rin always maintains her sense of hummus. Born and raised in Manila, Philippines, she keeps four pets: a dog, two birds, and a husband. Dances like the neighbors are watching.

She is represented by Rebecca Podos of the Helen Rees Agency. She is also fond of speaking in the third person, and may as well finish this short bio in this manner. While she does not always get to check her Goodreads page, she does answer questions posed to her here as promptly as she is able to.

I loved so much about the series: the politics, the characters (particularly Tea, Kaled, Lihk, Khalad, Zoya, Shadi), the romances, the diversity, the magic. The story progressed over each book in the trilogy—told through two different timelines, the present and past—and each book was better than the last. 🖤

As a writer, I cannot begin to understand how Rin wrote this trilogy. The characters, the magic, the politics were all so complex and vital to the story. I’m amazed at how the character and world building served the plot progression.

While this was a dramatic and action-filled story, I wasn’t as emotionally involved as I had hoped. I didn’t cry when important characters died, I rarely felt tense despite scenes of war, and it wasn’t until the final chapters of the third book that I shed a few tears. My only wish is that the emotion would have been cranked up throughout this series. If it had been, this series would have been 5 stars.

I’m so happy that the Fantastic Flying Book Club included me on this blog tour so I could read this wonderful trilogy. 🖤🖤🖤

🖤 “If there is one thing people desire more than a good story…it is when they speak their own.”

🖤 “Sometimes it is good to remind ourselves how bitterness tastes.”

🖤 “When people cut us, we are expected to do only two things: smile and bleed.”

🖤 “We can endure any amount of sadness, for the people we love.”

🖤 “People will never be what you make of them, but at least your own heart stays yours and true.”

🖤 “Then perhaps we should carve a world one day where the strength lies in who you are, rather than in what they expect you to be.”

🖤 “It’s not such a bad thing, to feel powerless sometimes. It teaches us that some situations are inevitable and that we should spend what little time we have in the company of the people that matter most.”

🖤 “But fear is a powerful motivator.”

🖤 “But grief means you have loved. To love opens up the possibility for grief. There cannot be one without the other.”

🖤 “People need someone to hate. And it’s easier to see that in others than to find it in themselves.”

🖤 “Patience is the long pause between action and its consequences. Lengthier silences open you up to introspection, and I’ve known a lot of solitude.”

🖤 “I don’t chase after people who don’t feel the same way about me as I do about them.”

🖤 “And you’re an ugly old woman hiding her mediocrity in expensive clothes.”

🖤 “Lies are sweet to the palate, but the truth is often spat out, bitter and rancid.”

🖤 “People tend to believe those who are in charge, no matter how ridiculous or corrupt they may be.”

🖤 “Have you ever loved anyone so fiercely you were afraid it might shatter you? It was a blessing and a burden I carried.”

🖤 “It is never wrong to wish for more happiness.”

Check out the Spotify playlist I created inspired by The Shadow Glass!

Enter the giveaway to win a signed copy of The Shadow Glass, an art print of Tea, signed bookplates, and stickers of Tea, Kalen, and Fox! Prizes pictured below!