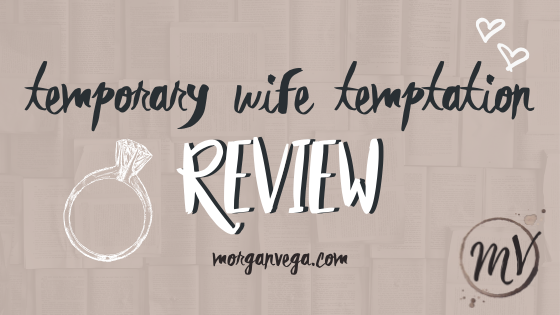 Thanks to Harlequin Desire for including me on this blog tour for Temporary Wife Temptation by Jayci Lee! 🖤

Much more than he bargained for…

Garrett Song is this close to taking the reins of his family’s LA fashion empire…until the Song matriarch insists he marry her handpicked bride first. To block her matchmaking, he recruits Natalie Sobol to pose as his wife. She needs a fake spouse as badly as he does. But when passion burns down their chaste agreement, the flames could destroy them all.

Jayci Lee writes poignant, funny, and sexy romance. She lives in sunny California with her tall-dark-and-handsome husband, two amazing boys with boundless energy, and a fluffy rescue whose cuteness is a major distraction. She is semi-retired from her 15-year career as a defense litigator, and writes full-time now. She loves food, wine, and traveling, just like her characters. Books have always helped her grow, dream, and heal. She hopes her books will do the same for you.

DID YOU ALWAYS WANT TO WRITE FOR HARLEQUIN?

SHARE YOUR FAVORITE MEMORY OF READING A HARLEQUIN ROMANCE.

During summer vacation in high school, I used to borrow 10 Harlequin romances per library trip and read them all day, and sometimes all night, long.

WHAT IS A RECENT BOOK YOU HAVE READ THAT YOU WOULD RECOMMEND?

Garrett resisted the urge to glance over his shoul­der to check on her. Natalie was a grown woman and he didn’t need to protect her from being swarmed by admirers. Besides, she was the one who had proposed they refrain from other relationships, so she wouldn’t do anything to hurt his reputation or hers.

Earlier, at her apartment, he’d caught fire at the sight of her in her little black dress. It was demure compared to the one she’d worn at Le Rêve, but it hugged her hour­glass figure and highlighted the curves underneath just enough to tease his imagination.

He walked to the bar for his Scotch and grabbed a flute of champagne from a server on his way back. As he’d anticipated, Natalie was now surrounded by a group of men and he lengthened his strides to reach her.

“Sorry to keep you waiting, sweetheart.” He pressed a light kiss on her lips and handed her the champagne.

“Thank you.” She leaned her head against his shoul­der when he pulled her to his side, playing her part like a pro.

“Natalie was just taking us to task about USC’s new head coach. It seems neither he nor I truly understand college football,” said one of Mike’s college friends.

“Is that so?” Garrett raised an eyebrow at her and she shrugged.

“Taking you to task is a bit harsh.” She hid her grin against the rim of her champagne flute as she took a long sip. “It’s just that I have a better understanding than you guys.”

The audience winced and guffawed at her cheeki­ness. As Natalie continued with her lecture, all the men listened intently, as did Garrett. She was funny and down-to-earth, and her mind was quicker than light­ning. Lost in her words, Garrett belatedly noticed the crowd had grown. Her champagne glass was depleted and her smile was becoming strained.

He leaned down close to her ear. “Tired?”

“All right, gentlemen. I’m whisking away my date now. I’m tired of sharing her.”

When the crowd finally dispersed, Natalie slumped against him with a groan. “I need food, champagne and somewhere to sit.”

A server walked over with a tray of bacon-wrapped shrimp and Natalie snatched a couple of them. She popped one in her mouth and mumbled around her food, “Not necessarily in that order.”

Garrett laughed and guided her toward the French doors leading out to the garden. Natalie ate every sin­gle hors d’oeuvre she met along the way and finished another glass of champagne.

“Holy cow. Is everything really, really delicious, or am I just famished? I would totally go back for that crab cake if my feet weren’t screaming at me to get my butt on a chair.”

He glanced down at her zebra-print high heels. They did amazing things for her legs but didn’t look remotely comfortable. “There’s a bench around the corner.”

“Oh, thank God.” She kicked off her shoes as soon as she plopped onto the seat.

Garrett shrugged out of his jacket and draped it around her shoulders before sitting next to her.

“Thank you,” she murmured, gazing at the garden. “It’s so beautiful out here.”

“Is it?” He and Mike had grown up tearing apart that very garden, but Garrett had never sat still and taken it all in, like they were doing now. “I guess you’re right.”

He studied her profile, her high, regal cheekbone and the graceful curve of her neck. Half of her hair had escaped the loose knot behind her head and fell down her back and shoulders. He wanted to sweep aside her hair and feel the softness of her skin, which he abso­lutely should not do.

“So how do you know so much about college foot­ball?” He tore his gaze away from her and stared at an old maple tree ahead of him, hard enough to make his eyes water.

“We’ve got time.” He made a show of checking his watch. “I’ll give you ten minutes.”

Her laughter filled the garden, then ended on a wist­ful sigh. “My dad and I, we weren’t very close. The only time he didn’t mind my company was when we watched college football together. He was a huge fan. I don’t think he even noticed I was sitting there half the time.”

Garrett understood what that felt like. As soon as he finished graduate school, he’d thrown himself into his work. It was satisfying in its predictability and it created a common ground for him and his father. His dad had stepped down from the CEO position when his mom died, but returned to Hansol a few years later as an executive VP.

“I thought if I learned enough about the sport, he’d like me a little better.” Her shrug told him it hadn’t worked, but Natalie told her story without an ounce of self-pity—like she owned her past, hurt and all. His respect for her deepened. “But soon I noticed I wasn’t faking my enthusiasm anymore. I’d grown to love the sport. Who knew it’d come in handy at an intimate birthday party for a hundred people?”

“You certainly won over quite a few of them.”

“I did?” Her eyebrows shot up in genuine surprise.

He huffed out a laugh. “Why did you think that crowd was hanging on to your every word?”

“Watch yourself, Garrett Song.” Natalie narrowed her eyes and pointed a finger at him. “I know where you live.”

He snatched her hand and tugged her to her feet. “Yes, and you’ll be living there with me starting Sun­day.”

“Ugh.” She hooked an index finger in each of her shoes, not bothering to put them back on. “Do you ever stop thinking about work?”

“Yes.” He cocked his head and pretended to con­sider her question. “But only when I’m thoroughly dis­tracted.”

Her lashes fluttered and color saturated her cheeks, and his gut clenched with heat. She could definitely become his most dangerous distraction.

Check out the other books from Harlequin Desire!